If we have an existing 3D scan/model of a scene, we want to point our smartphone there and see any changes as an augmented reality overlay immediately.
For this, we detect which objects have been removed/added or simply been moved around. In many environments, it is useful to observe such changes, e.g. for inventarization of offices, warehouses or urban spaces. Furthermore, this information can be used to train deep learning algorithms for semantic understanding of such environments.

Since 3D scans can be done in real-time using Kinect or smartphones, we also want immediate results of the change detection, unlike previous work which may take seconds or even minutes. To achieve this, we will exploit a hierarchical data structure for the scanned data so that the change detection can be run in parallel. In order to differentiate occlusions from real changes we need to know which volumetric regions of the space have already been seen by the sensor. For that we employ a smart flattened data structure since its interior is empty. If we consider the known sensor device noise properties, we can also get robust results. Therefore, we will augment the data with the uncertainty from the 3D scanner so that we know how far the samples are allowed to diverge.
Here is a paper detecting changes in point clouds and giving an overview of related work: https://perso.telecom-paristech.fr/boubek/papers/ChangeDetect3D/ChangeD… 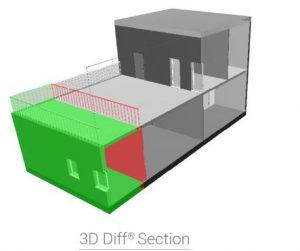