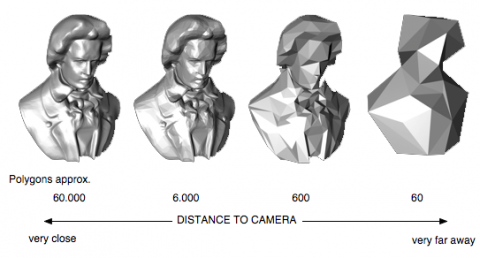 In rasterization, objects which are further away are smaller and usually representations with lesser detailed geometry are used to keep the performance. Levels-of-Detail (LOD) of meshes are computed automatically in order to achieve this goal,.or hand-crafted by artists for importance weighting of salient features within a triangle budget.

LOD creation can be done fast but then requires additional space in memory. We want to render arbitrary LOD from a single data structure on-the-fly, adapted to screen size, and for that augment an existing octree structure with pre-calculated importance weighting and screen-space weights, e.g. for foveated rendering in VR.

Here is source code (and link to paper) for creating an isovalue octree from a mesh: http://www.cs.jhu.edu/~misha/Code/IsoOctree/#DESCRIPTION as a base.

What do students have to do?

A bonus of €1000 if completed to satisfaction within an agreed time-frame of 1 year (master thesis) or €500 within 6 months (bachelor thesis, praktikum).