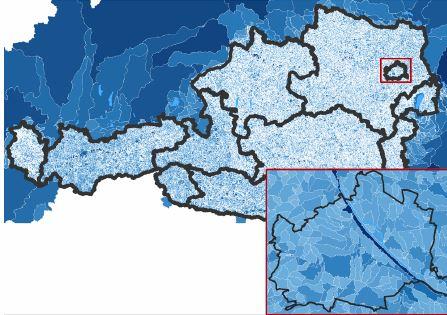 The accurate visualization of huge amounts of georeferenced vector data on heightfields in real-time is a common problem in the field of geographic information systems (GIS). Vector data usually consist of lines and polygons, which represent objects such as roads, rivers, buildings, and parks. The interactive exploration of these vector entities in large-scale virtual 3D environments and the resulting large zoom range pose an additional performance challenge for their visualization. Ensuring clear visibility of all objects of interest in overview and of their details in close-up views is difficult in such large-scale environments.
In this thesis, a screen-based visualization method of vector data is proposed, which combines two different approaches, a static and a dynamic approach, to control the behavior and the visibility of the corresponding vector entities. The vector data can represent real-world objects and to preserve their relative size to the rest of the 3D world, a constant object size is used for the static approach. But, this static behavior can cause vector entities to disappear when zooming out. Since lines are especially affected due to their small width, the dynamic approach scales them according to the current view in order to be clearly visible even from far away.
The evaluation results show that both screen-based visualization approaches can be applied in real-world use cases of a geospatial decision support system with large-scale environments and vector data consisting of several millions of vertices and still provide real-time performance. The results also highlight that the proposed screen-based visualization method produces larger render overheads compared with a volume-based visualization, but for large vector data sets, the new method outperforms it.